Miniature of traditional pongal setting that I did

Pongal is a very traditional and interesting festival that we love to celebrate. This year, just as ever we had a lot of fun.

The extra fun that I had this year was to decorate a miniature mockup of the ethnic pongal celebration. :) hey of course the pongal in it is true and edible. :)

The pic above is a set of small earthen pots that I got from Valluvar kotam. I pained it to make it look more special and ethnic. :) Loved making the sand base and miniature kolam too. :)

The entire scene setting is just within half feet measure. :)

It was hard to balance the sugarcanes that way. But I loved this pic :)

And yeah.. Kolam is one other thing that becomes mandatory for any traditional celebration. :)

Here is my first try on color kolam. I enjoyed doing it though it was a little time consuming. :) Yet to master the tricks of using color in kolam. :) 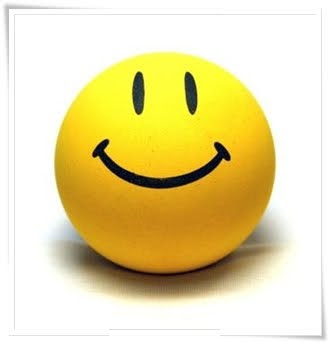 All smiles again!!!!
Little happenings add loads of josh to our life, that too I get all the more excited when it is on a weekend eve :) :) :)

I have been featured on webneetech.com.

One fine day, got a mail from the technical department of the site saying that they were really impressed with my blogs and they wanted to feature me in their site. I was of course very much excited about it. This interview was on a lighter side and I enjoyed answering their questions. 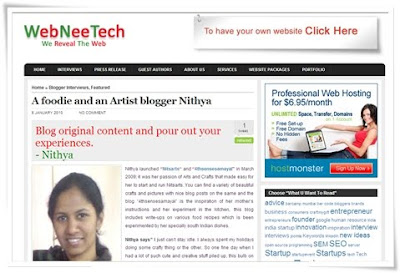 Wish you all a happy and leisure weekend :)

Kolam is my favorite art as you all know. :) But I have never been to a contest of this kind before.

Few days back, when I was gazing at the local news paper I found a column reading as
"Kolam Contest"
Lions club and Exnora sports club conducts a mega kolam contest at 10 Am on 3rd January, at Kasi Vishwanathar Temple, West Mambalam.

I was kind of tempted to participate but was equally scared too. Was wondering if I can really make a competitive one and make it finally. But I always had the courage to give it a try. So registered for it and my mom was a constant support for me always. She encouraged me so much and gave me ideas too.

The competition started at 10am and the given duration was 1 1/2 hours. They had allowed every participant to bring along a helper who can help them to complete the kolam.

But since I put in my own creativity in my kolam, I did not take my mom's help rather she participated as a contestant opposing me too :) That added little more josh and made it more interesting for me to do a better job than mom. :) :) :)

So now here it is...... This is the kolam that I did for the contest. Its absolutely an abstract well designed free hand kolam. :)

Mom did a great job too. I loved this peacock kolam of her's and she was flawless in her attempt at the contest too.

There were around 43 contestants and all of them did a great job. Infact most of them used colors and made it really attractive. :)

here is a long preview of the other entries for the contest.

Loads of hard work and group effort went on for an hour and a half.

Flowers, birds, symbols and so on....

Loads of people visited the show and enjoyed the tradition of Kolam :)

This was the practice session that I had attempted the day before the contest to check out my speed. :) I completed this one in 20 mins :)

Hi, I'm Nithya. I'm very much like any other Tom, Dick and Harry but with an exception of lot of patience, huge amount of interest and a bit too much of hyperactivity. My boredom brought me into such activities and now I really don't get to know what boredom means. :)

I am presenting few of the art works that I have tried over here, for your expert as well as novice comments which would greatly help me out to improve.

Thank you for visiting my space. :)

I am a part of